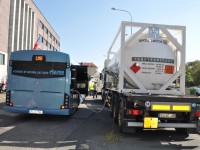 Natural gas driven vehicles were introduced in Prague within the promotional rally Blue Corridor 2012. In total 20 passenger cars and trucks and a bus will drive a journey of more than 6,000 km from Moscow via eleven European cities to Berlin.

The event shows perspectives of natural gas in the field of transport and documents the fact that travelling around Europe using natural gas is possible today. The Prague stop included the presentation of compressed natural gas and liquefied natural gas (LNG) vehicles and two panel discussions devoted to natural gas future in transport industry.

Within this year’s Blue Corridor event natural gas vehicles started in Moscow on 8 September and will go via Smolensk, Minsk, Brest, Warsaw, Ostrava, Prague, Karlsruhe and Paris up to Brussels, where there will be a meeting of European Union members on 17 September. From Brussels the vehicles will continue via Essen to Berlin.

“Approximately 16 million natural gas driven vehicles have currently been in operation in the world, from which 1.5 mil. in Europe. Experts estimate that their number will grow by 50 million worldwide by 2020. Due to this expected increase and due to natural gas benefits – especially its availability, safety, lower costs and emissions – this fuel will play a bigger and bigger role in the world energy mix,” Hugo Kysilka, a marketing director of VEMEX, forecasts bright future for gas.
“Position of power suppliers has been currently changing. Customers are not interested in a mere delivery of commodity any more, but it requires further services. The target is to increase as much as possible the effectiveness of energy economy in all areas – electricity, gas, heating, transport and of course in the light of environmental protection. CNG meets these criteria in the area of transport in hundred per cent. Fuel cost savings compared to diesel ranges between 30 and 40 per cent and over 50 per cent compared to gasoline, while impacts on environment are minimal using CNG. That is also the main reason, why we joined the initiative years ago,” adds Jiří Šimek, the Vice-Chairman of the Board of E.ON Energie.

The idea of Blue Corridor promotional rides started in 2000 with the support of Vernadsky Ecological Foundation in Moscow. This year’s Blue Corridor is aimed to call public attention to the possibility of using natural gas as an ecological, safe, cheap and available fuel and to show that travelling around Europe using natural gas is possible already today unlike other alternative fuels which have still been under development. Gazprom and E.ON are involved in the event.