Handover of the CNG filling station to Charvát a.s. 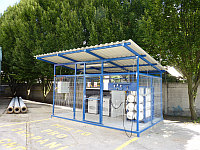 Company internal CNG filling station was completed, commissioned and handed over to the company Charvát a.s. in Doudleby nad Orlicí in late August. The station will serve for filling Linde fork-lift trucks using natural gas. The station is of MJ Variant 2K-980 type with the capacity of 10 m3/hour and a storage vessel for 245m3 of compressed gas. Filling capacity of the station will be gradually doubled in the following 2 years depending on how the numbers of fork-lift trucks as well as the consumption of CNG will be increased by the user. In 2014, it is supposed to achieve 60,000 m3.

By operating natural gas fork-lift trucks it is possible to save 50-70 % of fuel cost compared to diesel. Application of MJ Variant filling station on company internal logistics in operations using fork-lift trucks seems to be an optimal solution. In some cases, ROI reaches 1 year only. MJ Variant can be adapted to needs and requirements of customers depending on growth of its fork-lift truck fleet.

Charvát a.s. is a prominent producer and exporter of bitumen felts and shingles. With its production volume it ranks among the leading Czech producers. Over 70 % of the production volume is intended for export. The most important customer is Germany where the company has been active among the German as well as foreign competitors since 1993. What is more, the company’s products are well-known by the customers on the Austrian, Hungarian (subsidiary company Charvát Kft.), Romanian, Danish, Dutch, Polish, Slovak, Lithuanian and Latvian markets.