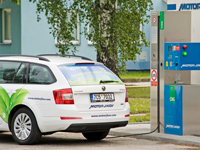 May 2017 – According to testing by the German ADAC auto club, the Škoda Octavia G-Tec running on compressed natural gas vehicle is more environmentally friendly than the acclaimed electric Tesla Model S, for example. The Octavia G-TEC CNG is the only non-hybrid and classic car with a combustion engine, which received a five-star rating in the test, while the Tesla Model S received four stars. For example, even the Toyota Yaris Hybrid CNG ranked behind Škoda.

For several years, the German ADAC automobile club has been regularly determining how actual cars are, not only in terms of end emissions during operation. The calculation adds another issue associated with the distribution of fuel or electricity. Normally, car emissions are indicate by the abbreviated TTW (Tank to Wheel, translated as a “tank on wheels”), i.e. those that the car actually releases. However, ADAC even adds WTT emissions, the Well to Tank (from the source “to the tank”). Subsequently, the value are added and the so-called WTW emissions is calculated (well to wheel), which could be understood as “from the source to the wheel.”