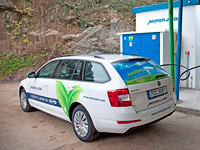 The first Škoda Octavia Combi G-Tec joined the fleet of MOTOR JIKOV GROUP, consisting of thirty-five CNG powered vehicles. “We definitely welcome the new typical fleet vehicle, which Octavia G-Tec undoubtedly is. It should gradually replace the Octavias in the MOTOR JIKOV fleet, five of which have already been converted to CNG power,“ said Vladimír Dvořák, the Head of Services of INVESTIX. CNG powered vehicles make up more than one half of the existing fleet, whether the vehicles were converted or initially produced as CNG powered, e.g. eighteen Volkswagens Passats, four Škodas Citigos, four Volkswagens Caddies and two Fiats Doblos.

The first Combi G-Tec has been “flying the colours” of MOTOR JIKOV since mid November. The gas Octavia propulsion version differs from the standard version only in its fifth door, and is served by a four-cylinder turbo-engine 1.4 TSI with 81 kW and has six gears. Even the dashboard does not vary from the standard Octavia too much. The driver can find the main and crucial difference in the lower part of a speed indicator, where a CNG storage tank indicator has replaced an indicator of cooling liquid temperature.

“We have already ordered another Octavia G-Tec, which should be delivered next year,“ added Vladimír Dvořák. The number of orders of Škoda Octavia G-Tec and Combi G-Tec exceeded also the expectations of the producer itself. The bestselling model on Czech market started to be offered in the gas version in June and the Mladá Boleslav automobile factory has reported over nine hundred orders since, half of which already being delivered to customers. The demand for the G-Tec version should reach one thousand by year-end.
Optimistic figures should also continue next year, when the gas version will create up to ten per cent of all Octavias sold on Czech market, doubling the estimated sales of 2014 in absolute numbers.