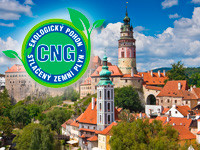 Upon opening, the station will be used by ČSAD Autobusy České Budějovice, a bus transport company, with its four buses; two urban Irisbus Citelis buses and two Iveco Rošero ones. Czech Post also plans to purchase twenty CNG vehicles for its depot in Český Krumlov.
“CNG vehicle operating costs are half the costs of petrol and oil, so it’s good not only bus companies but also Czech Post, the Police of the Czech Republic, fire brigades, forwarding companies and other large companies which can complete their fleets with compressed natural gas powered vehicles. I can clearly see an increase of CNG consumption in public filling stations which have been built in Písek and Jindřichův Hradec”, said Miroslav Dvořák, the general director of MOTOR JIKOV Group.
“Output of the Jindřichův Hradec station has increased four times from February to October, while in Písek we recorded an output of 23,225 kg of CNG in January and 33,575 kg of CNG in October”, said Karel Papežík, executive director of Zliner Energy.

“Companies with a CNG fleet can save hundreds of thousands and even millions of Czech Crowns per year in the case of larger fleets as can be proven in MOTOR JIKOV, where of course we use CNG powered vehicles and fork lift trucks. Our savings amount to 2.5 million Czech Crowns per year”, pointed out Jiří Slíva, director of the Special Machining and Production Division of MOTOR JIKOV Strojírenská.

With its capacity and equipment, the CNG station in Český Krumlov will be able to refuel not only buses, but also passenger and service cars as well as trucks. The compressor station is equipped with one compressor so far with 140 cubic meters of power per hour. Adding another compressor with the same power output is assumed for the future, which will double the capacity of the CNG station.
The three-sectioned storage vessels for compressed natural gas have a geometric volume of 4,480 l and can hold over 900 kg of CNG.
Schwelm Anlagentechnik GmbH, a German partner company and dominant supplier of CNG stations in Germany, is the producer of the compressor technology.
The ADAST Systems Company produced and supplied the automatic dispenser, which is equipped with hoses and NGV1 and NGV2 terminals. A payment terminal is a part of this dispenser and was made by the UNIDATAZ Company. It operates using company chips, CNG cards as well as standard bank payment cards VISA and EC/MC; it is controlled using an LCD display.