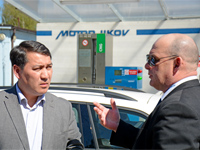 May 2016 – Serzhan Abdykarimov, Kazakhstan’s Ambassador to the Czech Republic, was interested in details on CNG filling stations produced by MOTOR JIKOV Strojírenská.
“We presented our company’s products and services to the Ambassador and the great potential for future cooperation with Kazakh firms. We have already had a meeting with the KazTransGaz on CNG directly in Kazakhstan and we believe that similar meetings and contacts on the political level will help us break into the market,” said Tomáš Prášil, the Director of Project Management at MOTOR JIKOV Group.

“One of the tasks of the Kazakh Embassy is to develop international relations between our countries, and we have already concluded seven memoranda of cooperation between Czech regions and territories in Kazakhstan. Our Kyzylorda region is interested in cooperating with South Bohemian companies,” noted Serzhan Abdykarimov. During his visit to MOTOR JIKOV, he also mentioned the fact that the EXPO 2017 exhibition called Future Energies will be held in Astana, the capital of Kazakhstan. “It definitely is an opportunity to present ecological projects such as this,” pointed out the Ambassador.