The number of CNG powered vehicles has already exceeded 8 thousand 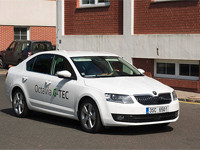 October 2014 – According to the Czech Gas Association’s statistics, the number of CNG powered vehicles has already reached eight thousand.

This means that as of the end of this year’s 3rd quarter, an additional 1,345 CNG powered vehicles are being driven on Czech roads, bringing the total to 8,055. This represents a nearly 30 per cent year-on-year increase compared to 2013; the last year-on-year increase of CNG powered vehicles was about 2 thousand vehicles. There are minimally 518 CNG powered buses and 83 service vehicles being operated in more than 35 municipalities in the Czech Republic from the overall number of vehicles,.

The long-awaited launch of the domestic ŠKODA Octavia G-TEC has caused another boom in interest in purchasing CNG vehicles. The traditional Octavia usually holds over a 30 per cent market share in this category. The number of orders for ŠKODA Octavia G-TEC and Combi G-TEC has exceeded the expectations of the producer itself. These models are largely intended for company clients and organisations with large fleets in the Czech Republic which have 500 to 700 CNGs, resulting in a large demand for these models. “The boom in CNG vehicles is also driven by the demand for ecological vehicles and meeting strict emission limits. The same trend is reflected globally. About 2.3 million CNG powered vehicles are sold worldwide annually and this number increases year by year; in 2023 it should be up to 3.5 million per year,“ says Jan Ruml, the Executive Director of the Czech Gas Association. The offer in the Czech Republic consists of about 65 types of vehicles of all categories, from which about 35 of them are passenger vehicles. Companies provide up to a 35 per cent discount for some CNG powered vehicles.