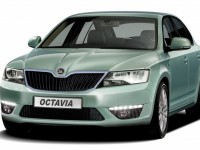 The information was published in Thursday’s magazine Škodovácký odborář (18.10.). The car factory will introduce the third generation of its best-selling model in early 2013. The world premiere of the model will take place on the Geneva Motorshow in March 2013.

Michael Oeljeklaus, the head of production, informed trade unionists about the date of Octavia production start at the company meeting in October. Together with new Octavia, also the production of the Yeti model using parts imported from the Czech Republic will start in Russia. Škoda will reveal a design of its long time best-selling model in the sedan and kombi versions at the beginning of the year.

The vehicle is designed on the same platform of VW Group, which is used by Audi 3, Seat Leon and VW Golf. For next year the versions RS and Scout are considered, too.

For the first time in Octavia history, the CNG fuel will be used in the proven engine 1.4 TSI EcoFuel that is well known from the successful Volkswagen Passat.
Source: Novinky.cz