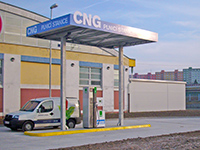 March 2014 – Česká pošta is a state enterprise providing postal services in the Czech Republic.
It is very progressive in its plans and some time ago it started to gradually convert its large fleet to compressed natural gas (CNG) powered vehicles. This trend is not only very environmentally friendly, but also profitable for Česká pošta.

Last January it started to utilize a CNG filling station situated in its depot in Plzeň operated by the VEMEX company. The station was installed by the South Bohemian company MOTOR JIKOV Strojírenská in cooperation with German Schwelm Anlagentechnik GmbH and ADAST Engineering Adamov. This CNG filling station serves for fast filling of the large fleet of CNG vehicles of Česká pošta and also serves as a public filling station.

The compressor station situated in a sound-proof concrete container is equipped with one four-degree air-cooled compressor with a capacity of 140 m3 per hour and an option to double this capacity by adding a second compressor. It is equipped with a three-section high-pressure storage tank with a volume of 2,240 l, which can store 460 kg of compressed natural gas at an operating pressure of 285 bars. The double sided ADAST V Line dispenser is equipped with hoses with NGV1 nozzles and thanks to its two flow indicators it is able to fill two vehicles at the same time. The dispenser is equipped with a payment terminal enabling use of company chips, CNG cards as well as VISA and EC/MC credit cards. Operation of the whole CNG filling station is fully automatic.

Česká pošta (Czech Post) was established on 1 January 1993 (same date as the independence of the Czech Republic). After many decades, it could follow the best traditions of Československá pošta (Czechoslovak Post), the First Republic state enterprise, and prove its viability in a market economy environment. Slovenská pošta (Slovak Post) and Czech Telecommunication Administration were separated from the original company. With almost 33 thousand employees it is the largest Czech company in terms of number of employees.