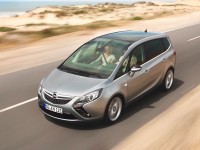 New Opel Zafira Tourer with compressed natural gas drive occurred on market at the beginning of 2012, extending the range of original CNG vehicles with a modern family MPV.

As well as the previous one, the third generation of Zafira will be offered with the compressed natural gas (CNG) drive from factory production. According to Opel this Zafira Tourer can drive approximately 530 kilometres using one fuel tank.

Zafira Tourer CNG is driven by the 1.6 CNG Turbo ecoFLEX engine with the power of 110 kW and the highest torque of 210 Nm. In a combined cycle this MPV consumes 4.7 kilograms of CNG per 100 km, which equals 7.2 m3 CNG per 100 km. The engine can burn also biogas or a mixture of natural gas and biogas. The vehicle is equipped with an emergency 14-litre gasoline tank in case a driver runs out of the compressed natural gas. In such case the engine will automatically start burning gasoline from this tank.

A new generation of Zafira using CNG is as powerful as the previous one, however it is more economic. Opel achieved longer driving distance also due to bigger gas storage vessel, which can contain up to 25 kg of CNG. That is by 4 kilograms more than at its predecessor. The vessel is not made of steel but of composite materials, e.g. carbon fibres. That helped to save 85 kg from the total weight of the vehicle. Instead of mechanical regulators of pressure the electronic ones are used.

Opel brought the first CNG vehicle to market in 2001. It has sold over 70 thousand of such vehicles in Europe since, over two thirds being Zafiras. Together with Zafira Tourer CNG Zafira CNG will still be offered as a cheaper alternative based on the previous generation of this MPV.
Check out the spot about this car on the TV Prima show Autosalon, accessible at http://www.autosalontv.cz/autosalon-36-1/tema-cng