Motorists will have another CNG refuelling station, this time in Jindřichův Hradec

MOTOR JIKOV has started construction of another station eight months after the commissioning of the first public CNG filling station in Písek, this time in Jindřichův Hradec.

“There is a lot of interest in CNG in Jindřichův Hradec both by individuals and companies. Examples are the Czech Post, DK Open bakery or the AGRO-LA company as well as many other companies and institutions, which are considering acquiring CNG vehicles and have been hesitating so far for example because of lower availability of filling facilities. We assume that the new public station, which is very well accessible from the main road, will increase CNG attractiveness in the Jindřichův Hradec area. If there are no complications, we would like to start its operation this December”, said Jiří Slíva, Director of the Special Machining and Production Division of MOTOR JIKOV Strojírenská regarding the construction of the public CNG filling station in Jindřichův Hradec.

This company started the production of the MJ Compact 05, its own refuelling appliance for direct filling, in 2010. A year later it won the prestigious E.ON Energy Globe Award Czech Republic with it and now, three years later, the company has four types of technologies for compressed natural gas filling in its portfolio. It will thus satisfy the entire spectrum of customers, starting from individuals through small and medium size enterprises up to large companies. The company has started implementation of public filling stations this year. The first was in April in Písek, where it commissioned the first public CNG filling station in the Písek area in partnership with ZLINER ENERGY in the premises of the Jitex company in Písek. With the construction of another station in Jindřichův Hradec the company continues with active extension of the availability of this alternative fuel. 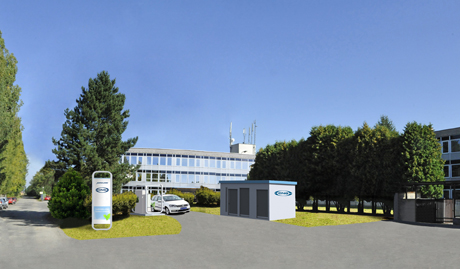 The station in Jindřichův Hradec will be based on MJ SAT filling technology with a Becker & Söhne compressor of a power of 157 m3/hour and pressure vessel of 2,240 l / 285 bar. It will be equipped with an Adast dispenser and NGV1 and NGV2 terminals as well as an integrated payment terminal for payment using all standard credit cards, including a CNG Card. Both passenger vehicles and vans will be able to refuel here and the NGV 2 terminal will also enable refuelling buses and trucks.

“The popularity of CNG is growing. This fuel has a big future in terms of the environment as well as safety and economy. The only disadvantage so far has bee an insufficient network of stations; there are about fifty in the Czech Republic at the moment, therefore the refuelling possibilities were slower than in the case of standard fuels.  We want to change that by extending the network of public filling stations, and bring comfort to travelling using CNG,“ says Miroslav Dvořák, Chairman of the Board and General Director of MOTOR JIKOV Group.

Compared to petrol the operating cost of CNG vehicles is lower by 50 %. One costs about 1 CZK. Almost 6 thousand CBG-powered vehicles have are operated in the Czech Republic and a further 35 stations should be added to the existing 49 stations by 2015. Experts even expect that the Czech Republic should have about 400 CNG filling stations in 2020.