Ecological MHD Buses Gas is being pumped from the new station 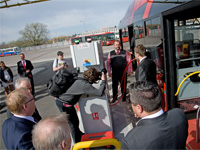 A CNG filling station for 24 buses was put into operation by Dopravní podnik České Budějovice (DPMČB, Public Transit of České Budějovice). The supplier of the technology was the South Bohemian company MOTOR JIKOV Strojírenská a.s. These new buses running on compressed natural gas purchased by DPMČB will contribute to cleaner air in the city.

“CNG is an ecological alternative to petrol and diesel engines nowadays, as it’s proven and inexpensive. The costs associated with running on CNG are about half as much as compared to petrol and diesel so it’s no wonder bus carriers are also expanding their fleets. To realize the filling technology for the operator of public transit of České Budějovice was a question of prestige for a local company like us,” emphasized Miroslav Dvořák, the CEO of MOTOR JIKOV Group a.s.

The capacity of the CNG station meets the requirements for 24 CNG buses. The total capacity of its compressors is nearly 600 m3/hour, the geometric volume of the CNG tank is close to 9,000 litres and holds approximately 2,500 m3 of compressed natural gas. The station is equipped with two double-sided dispensers with hoses and NGV 1 and NGV 2 terminals for filling buses, trucks and passenger cars.

“A company with a CNG fleet can save hundreds of thousands, and even tens of millions of crowns a year on fuel for companies with larger fleets, like a transport company. Of course, we also use CNG-powered vehicles and CNG forklifts to save more than two million crowns a year,” highlighted Jiří Slíva, Director of the Assembly Division at MOTOR JIKOV Strojírenská a.s.
The new Solaris Urbino 12 and 18 CNG vehicles extended the DPMČB’s fleet by 24 buses, 19 of which will be short and 5 articulated. Investments in this renewal reached 172.7 million crowns, 85 percent of which was co-financed by EU funds. The city carrier purchased the filling station from its own resources, which amounted to about 27 million crowns.
“The renewal of the fleet and the introduction of new technologies are based on the strategic goals that our company introduced in 2016 when we launched our so-called ‘smart journey’,” said company Director and Deputy Chairman of the Board, Slavoj Dolejš.

“Cities like České Budějovice have to choose alternative forms of urban public transport in order to at least partially offset the ecological burden caused by heavy car traffic,” said Jiří Svoboda, the Mayor of the city.

According to data from the Czech Gas Association, almost 20,000 CNG vehicles are now operating In the Czech Republic, with the largest share of them being public transport buses at over 1,100. The number of CNG vehicles increased by more than 4,000 year-on-year, with an increase being also seen in the expansion of the necessary infrastructure. Last year, the number of new CNG public stations grew by 27. The Czech Gas Association sees this growing interest mainly in urban public transport. Compressed natural gas buses are already in more than 60 Czech cities.

In the south of Bohemia, MOTOR JIKOV has built public pumping stations in Jindřichův Hradec, Písek, Český Krumlov, Milevsko and in Těšovice near Prachatice, among others.